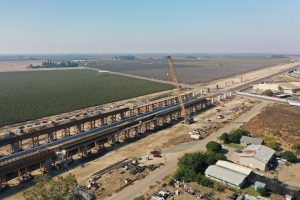 If approved by the Authority’s Board of Directors in August, this project section and its environmental document will complete full environmental clearance for high-speed rail in Northern California.

Currently, environmental studies are completed for 611 km (380 miles) of the line from the Bay Area to northern Los Angeles County which “brings us into San Francisco and nearly 423 miles [680 km] to be environmentally cleared,” Brian Kelly explained.

Under both high-speed rail project build alternatives to be considered by the authority’s board, an interim rail station is planned at 4th & King streets in San Francisco, until the connection to Salesforce Transit Center is made, along with a station at Millbrae that offers a direct BART connection to San Francisco International Airport. Both Caltrain stations would undergo alterations to accommodate high-speed trains, including modifications to existing tracks and platforms.

The California high-speed rail project is currently under construction along 191.5 km in California’s Central Valley at 35 active job sites. To date, nearly 8,000 construction jobs have been created since the start of construction.