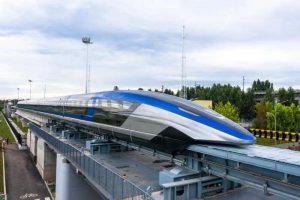 CRRC says that the train represents country’s latest scientific and technological achievement in the field of rail transit sector.

At present, the integration and joint commissioning of the system has been completed, and the 5-car train has achieved stable levitation and dynamic operation on the commissioning line of CRRC Sifang plant, with excellent performance in various functions. This is another important milestone after the successful test run of the 600 km/h high-speed maglev prototype car on June 21, 2020, CRRC says.

The train is able to accommodate ten coaches with a total capacity of 1,000 passengers, with 100 passengers on each railcar.

The high-speed maglev train can cover the 1,000 km route between Beijing and Shanghai within 2.5 hours, faster than the high-speed train which provides a travel time of more than 5 hours. In addition, it is a reliable and faster solution to air transport which cover the distance between the two cities within 4.5 hours. As along as a passenger has to spend more time in the airport to reach its flight, travelling by maglev train will allow to save time, and also to benefit increased transport connection when reaching the destination. Usually, a train station provides better and more and faster public transport services.

In 2016, CRRC has made public its intention to develop a high-speed maglev train running on magnetic – levitation system and three years later, in 2019, the manufacturer has presented its prototype designed to run at a maximum speed of 600 km/h.