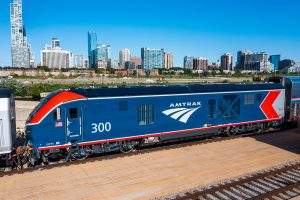 Amtrak has unveiled at the Chicago Union Station the first new Charger diesel-electric locomotive manufactured by Siemens Mobility at the Sacramento manufacturing plant, in California. The new locomotive will enter passenger service beginning in fall 2021.

In 2018, Amtrak ordered 75 low-emissions long-distance Charger locomotives designated as ALC-42 with deliveries expected to be completed by 2024. Amtrak also has a provision to order additional ALC-42 series locomotives.

USD 850 million was the value of the contract which will support the replacement of the current fleet on the National Network, including all long distance and many state-sponsored routes.

The new locomotives 4,200-horsepower locomotives will primarily replace Amtrak P40 and P42 diesel-electric locomotives. Although modern when bought in the 90s, the P-series locomotives have been intensively used for more than 25 years, lack up to date technology and do not achieve the currently high emissions standards.

Under the contract, five of the first six locomotives will have this version of Amtrak’s current Phase VI paint scheme and one will be painted to recognize next year’s 50th anniversary of the inauguration of Amtrak service.

The Charger diesel-electric locomotive is developed by Amtrak with Siemens Mobility and is equipped with the latest safety systems, including Positive Train Control and Crash Energy Management.

They have alternating current propulsion for a maximum speed of 200 km/h (125 mph). The 16-cylinder cummins QSK95 engine has Tier 4 Emissions Technology to reduce nitrogen oxide by more than 89 per cent and particulate matter by 95 per cent, while providing a savings in diesel fuel consumption and reaching Amtrak Sustainability goals.

These new locomotives are part of Amtrak’s long-term planned series of improvements for fleet, infrastructure and stations, including the new Acela trainsets which entered tests at the beginning of 2020. Improvements are ongoing at New York Penn Station and Moynihan Train Hall, in addition to expanded development of the major stations at Washington, D.C., Baltimore, Philadelphia and Chicago.