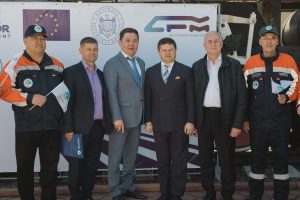 The state-owned rail company of the Republic of Moldova, Calea Ferată din Moldova (CFM) has launched the modernisation of Tighina – Basarabeasca – Giurgiulești line.

The works for the 233 km railway line will be implemented by Termizhol Zhondeu company, part of Komkor Management Group.

Oleg Tofilat, the Director General of Calea Ferată din Moldova, Valentin Cimpoieş, the Mayor of Basarabeasca, Iskander Karsibekov, the representative of Termizhol Zhondeu and Gintautas Baranauskas, Deputy Head of Cooperation at the Delegation of the European Union to the Republic of Moldova attended the official ceremony.

Following the completion of the project, transport capacity and safety along the line will be increased, the travel time will be significantly reduced and will create optimal conditions for freight transport. The project will remove the weight and speed limits allowing trains to run at a speed of 120 km/h from currently 90 km/h. Currently, along the line there are 44 sections totalling 62.5 km which are facing speed restrictions.

The project has a total estimated cost of EUR 107.5 million. It is supported by the European Union and is financed by the European Bank for Reconstruction and Development and the European Investment Bank. In December 2021, the EIB has provided Calea Ferată din Moldova a EUR 24 million financing for the rehabilitation of the 233 km of railway along the Bender – Basarabeasca, Etulia and Giurgiulesti corridor. In October 2021, the EBRD and CFM signed a EUR 23.5 million agreement for the  modernisation of Tighina – Giurgiulești railway line as well as locomotive procurement.

The rehabilitation of Tighina – Basarabeasca – Giurgiulești line, part of country’s South Corridor is underlined by the CFM’s investment plan for 2031 covering rehabilitation projects for four mainlines estimated at EUR 400 million.

For 2022, CFM announced that will implement a rail modernisation plan until 2024 estimated at more than EUR 300 million.