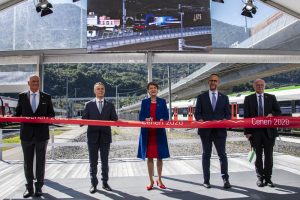 650 guests were invited to the inauguration ceremony, but due to the coronavirus pandemic the event has been considerably reduced. Thus, the event was attended by the three officials, together with SBB CEO Vincent Ducrot and ATG CEO Dieter Schwank and the press.

A ribbon has been cut in the traditional manner to mark the completion of the construction project, and a freight train made the very first trip through the tunnel.

The Ceneri Base Tunnel opening marks the completion of the final link of the New Rail Link through the Alps (NRLA). The 15.4 km rail tunnel provides continuous level-track rail route through the Alps.

In passenger transport, SBB will implement the majority of the planned services on schedule when the timetable changes mid December. In addition to improvements in regional services, there will be faster and more frequent north-south connections and more international services.

The tunnel will be commissioned to coincide with the change in the public transport timetable in mid December. The SBB and its partners are planning various events. On 12 December an event will be held with selected guests, and on 13 December the first timetabled intercity train to pass through the Ceneri tunnel will be celebrated.

Next summer festivals will be held in Bellinzona, Lugano and Locarno to celebrate the opening of the Ticino suburban railway. The Ceneri Base Tunnel creates much better connections for the three towns and indeed the whole canton, almost halving the journey time between Lugano and Locarno.