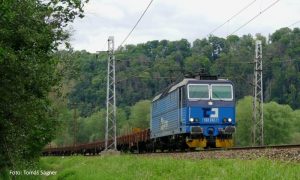 Under the contract, 18 locomotives will be converted and equipped with the European Train Control System provided by ČD Telematika and AŽD Praha.

In March 2020, ČD Telematika handed over to CD Cargo the locomotive 163 022, which is the prototype of the locomotive series 163, that was equipped with the ETCS and all related components.

The locomotive entered trial operation which have been set by the Rail Authority of the Czech Republic. The trial was conducted until April 2020. The newly installed equipment such as the national train control system LS06, the electronic speedometer TELOC 3000 and others were the subject of tests. The ETCS is currently in a secure state, the so-called isolation mode.

The training of ČD Cargo employees took place at the beginning of March to prepare the testing phase.

The project has received financial support from the Transport Operational Programme. In addition, the Czech Republic has received co-financing from the Connecting Europe Facility to equip the locomotive series 163 with the ETCS. The financing also covered the ETCS installation on the 742.71 locomotive under the project on the deployment of ERTMS/ETCS on-board components compliant with ETCS Baseline 3 in ČD Cargo vehicles. EUR 32 million was the eligible cost of the project of which EUR 27.5 was the CEF funding. The project has been submitted under the CEF 2015 call. The project is expected to be completed in December 2022. It concerns the deployment of ERTMS/ETCS on-board components compliant with Baseline 3 on CD Cargo locomotives that run on the Orient/East-Med, Rhine-Danube and Baltic-Adriatic Core Network Corridors (CNCs).

The project’s goal is to increase railway interoperability through the deployment of ERTMS/ETCS Baseline 3 on-board components. Once the project is fully implemented 128 locomotives, of which 3 prototypes and 125 vehicles operating on the TEN-T CNC in the Czech Republic and in other Member States will be fully interoperable for smooth international cooperation.