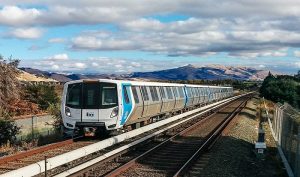 Under the new contract, Parsons will provide design services during construction (DSDC) for the CBTC implementation, which will replace the existing automatic train control system on 201 km of track, while minimising the impact to revenue operations.

“We will apply our unique systems integration approach to help improve the Bart system that has served the Bay Area for more than 45 years,” Tom Topolski, executive vice president of Parsons, said.

The new system will improve passenger transport capacity, provide a state of good repair and result in a safer, more efficient transit system.

To achieve the shorter headways needed to operate 30 regularly scheduled trains per hour through the Transbay, Bart will replace its existing fixed-block train control systems with a new CBTC system. The authority has developed a 8-phase implementation programme that will begin by testing CBTC equipment on BART’s existing test track in Hayward, and then once the CBTC equipment has been sufficiently proven on test tracks, BART will implement CBTC along the mainline tracks in stages.

In January 2020, Bart approved a USD 798 million contract to Hitachi Rail STS USA for the design and construction of CBTC signalling technology.

For the Transbay corridor capacity programme, the Federal Transit Administration is providing a USD 1.2 billion grant. The project will see an increase of train frequencies between San Francisco and Oakland by more than 30%, and overall capacity by more than 36%. Through the Transbay Tube, the capacity will increase to 28 trains per hour by 2030.

The programme will also includes the acquisition of 306 additional rail cars. BART has 775 new rail vehicles on order, which will allow the agency to completely replace its aging fleet of 669 vehicles and to expand the fleet by 106 cars.