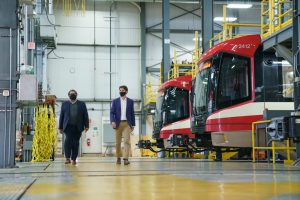 The Government of Canada has committed to invest up to CAD 1.53 billion (USD 1.2 billion) for the construction of Calgary Green Line as part of city’s light rail expansion project. The federal funding for this project has been announced in 2018 and is the largest contribution ever made by the Canadian Government to an infrastructure project in Alberta.

CAD 4.9 billion (USD 3.9 billion) is the total value of the financial commitment made by the authorities. The Government of Alberta is contributing CAD 1.53 billion (USD 1.2 billion) toward the new Green Line LRT project, while the City of Calgary is contributing CAD 1.59 billion (USD 1.27 billion). As the largest infrastructure project in the city’s history, the Green Line will play a key role in shaping the future of Calgary by connecting people and places, reducing congestion, and creating up to 20,000 jobs.

The Green Line will have a total length of 46 km and will be constructed within two phases. The first stage line covers the construction of 20 km LRT from 16 Avenue N. to 126 Avenue S.E. It will be the core of the project and will enable future expansion north and south, as funding is available to realize the full benefits of the Green Line LRT. This phase will be constructed in two segments. The first section will run from Ramsay/Inglewood to Shepard (126th Ave. S.E.) stations. The construction on is expected to begin in late 2021. The second section will extend from 16 Avenue N. to Ramsay/Inglewoood and includes the bridges over the Bow River and Elbow River, tunnel through Beltline and Downtown, and North Central BRT improvements. Planning for section 2 is underway and is expected to begin construction in 2022. 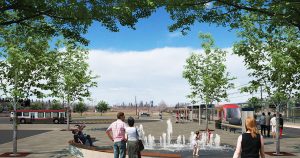 The Calgary Green Line will ensure that communities in the southeastern part of the city will have access to the light rail network, and that communities in the north-central part of the city will benefit from investments in rapid bus transit infrastructure for the future. Once fully built, 250,000 inhabitants will live within a 15-minute bus trip of the Green Line alignment.

“Investments in transit are among the very best investments for a community. The Green Line is more than a train, it is a way for people to get to work and school and better participate in our community. Calgarians have been waiting for this for so long and it’s great to take this important step,” Naheed Nenshi, the Mayor of Calgary said.

The new Green Line is expected to reduce greenhouse gas emissions by 30,000 tonnes per year, the equivalent of taking 6,100 cars off the road.