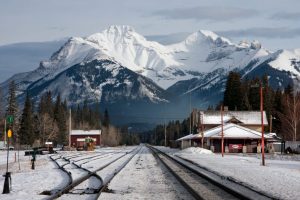 The Government of Alberta and Canada Infrastructure Bank (CIB) signed a memorandum of understanding to assess the feasibility of Calgary-Banff rail passenger service. Under the agreement, Canada Infrastructure Bank will financially support the feasibility study. The two sides will analyse the financing options, and will assess the environmental, social and economic benefits.

The new service would run between Calgary International Airport and Banff, with six potential stops.

“We are pleased to be partnering with the CIB to complete a feasibility study for the Calgary-Banff Rail project. The CIB brings expertise and experience that is needed for a project of this scale. We look forward to learning more about this exciting project and hearing from our community partners about how this opportunity can support our tourism industry and get our economy back on track,” Ric McIver, the Alberta’s Minister of Transport said.

The Calgary-Banff rail passenger service envisages a new 130-km dedicated rail link on the existing Canadian Pacific Railway corridor. The new service is expected to deliver eight departures per day from the Calgary International Airport to Banff. The express service would provide a 20-minute travel from the airport to Calgary downtown. Calgary International Airport, Downtown Calgary Cochrane, Morley, Canmore and Banff are the six stations proposed under the project.

As Banff is an important tourism destination in Alberta attracting four million visitors a year, the project is part of a programme to boost the tourism industry. The Government is building a 10-year tourism strategy to double tourism spending in Alberta province to CAD 20 billion (USD 14.7 billion) by 2030.

“The Calgary-Banff Rail project would create a new transportation option from Calgary International Airport to one of our national treasures. A sustainable and commuter-centric transport system is essential to serve the growing travel demands of both tourists and Albertans alike,” said Canada’s Minister of Transport, Marc Garneau.

It has been almost 30 years since the Province of Alberta had regular rail service between its largest city and Canada’s most visited national park. Residents of First Nations communities would see increased employment opportunities with easier access into Calgary and points in between.