With the German operator Ruhrbahn GmbH, CAF signed a contract to deliver 51 light rail vehicles as well as all relevant spare parts. The new vehicles are planned to be delivered between 2024 and 2026.

With an investment of EUR 150 million, Ruhrbahn will renew its tram fleet by 2026.

The new LRVs will be bidirectional and 28-meter-long vehicles. They will have a capacity of at least 173 passengers including two multipurpose places for wheelchairs or prams. In addition, and for enhanced safety, the trams will be fitted with a driver assistance system and rear-view cameras instead of the usual mirrors. 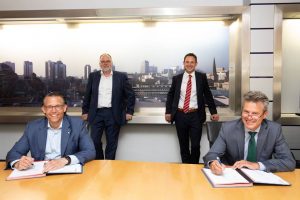 The vehicles will run on the tram network which services the cities of Mülheim and connects them to each other. This network currently spans a total of 155 km, serving as the transport backbone for the entire metropolitan area.

“The modern vehicles have air-conditioned system and dedicated driver area as well as two multifunctional spaces for passengers with reduced mobility. The door opening and closing is supported by an optical and acoustic display. In the tender, we also deliberately relied on the bogie technology with springs, which is characterised by its smooth running and high level of driving comfort, Michael Feller, the Managing Director Ruhrbahn said. 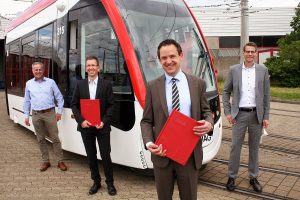 The second contract was signed with VAG Freiburg municipal company, which is responsible for the operation of the Freiburg tram system. Under the contract, CAF will supply 8 new trams which will be added to the 17 existing Urbos trams. This fleet extension contract was already considered when VAG Freiburg awarded CAF the initial contract. These new units will replace the GT8N vehicles, which have been running since the early ‘90s, providing improved accessibility and greater capacity as they are now 9 metres in length compared to the previous trams.

The new trams are expected to be delivered from September 2023 to April 2024. “The eight new light rail vehicles will mostly replace vehicles of the type GT8N that have been in use with us since 1990/91 and expand the vehicle fleet to meet the growing demands,” Stephan Bartosch, the  Board of Managing Director said.

The new trams not only correspond to the current state of technical development, but also bring even more accessibility and capacity to the VAG network. With the use of the new vehicles, the old trams can then be replaced gradually.