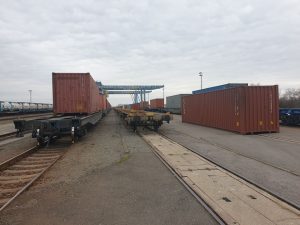 Bulk Transshipment Slovakia is the new tenant of the Dobrá Combined Transport Terminal (TKD) following TransContainer’s withdrawal. The new tenant of the terminal, in cooperation with ZSSK Cargo Slovakia, the owner of the terminal, has transshipped first compact intermodal train for Metrans in February. This aims to be a starting point for development of intermodal transport via the new Silk Road route from Ukraine and Slovakia.

“We will open the Terminal for all operators, unlike the previous tenant TransContainer that only used it for its own needs. We are ready to offer service to all current customers and to the new ones as well,” said Martin Vozár, the CEO of ZSSK Cargo.

The main target of Bulk Transshipment Slovakia relating to TKD Dobrá business is to provide competitive services and to maximise the capacity of the terminal when it comes to intermodal transport from Asia to Europe and vice versa. To plan further development of the terminal it is necessary to get support from the state, state administration and self-governments. This includes an unsolved issue (since 1992) of opening road border crossing “Čierna – Solomonovo” which would be beneficial for the terminal usage as well as for development of the entire region of Eastern Slovakia. This is incorporated by the importance of state investments into related road and railway infrastructure.