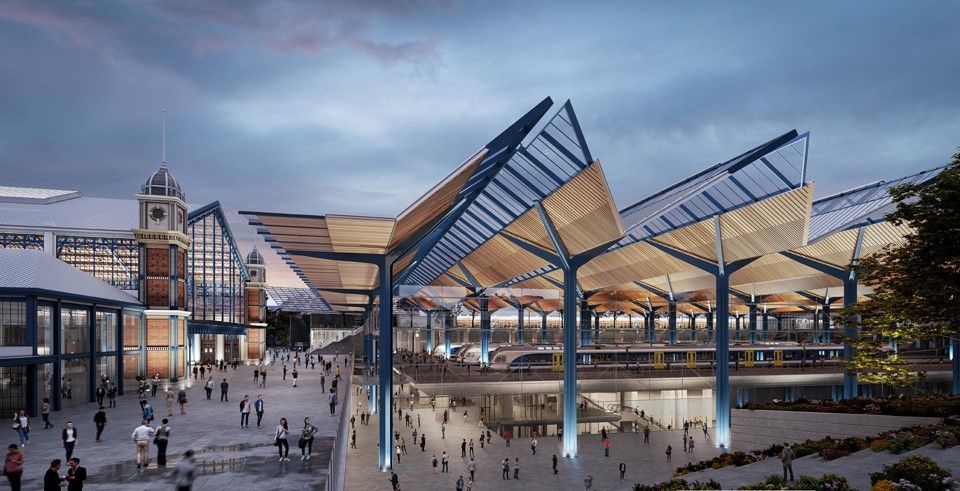 The development of Nyugati underground station has obtained a EUR 2.76 million financing from the first call for proposals of CEF2. The funding was provided for the submitted project covering the improving the Budapest rail node – design phase of a new rail connection on the OEM/RHD and MED corridors under the city centre project which will deliver passenger services connected to
Nyugati station.

“Our goal with the development of the railway is clear: to provide a service that is comfortable for as many passengers as possible, competitive with road transport and to divert as many goods as possible towards environmentally friendly rail transport,” Dávid Vitézy, the state secretary responsible for transport policy at the Ministry of Technology and Industry said.

The rail expansion project in Budapest covers the development of the Southern Railway Ring which is the most important railway link which will significantly expand the rail capacity not only in Budapest, but also on Hungarian railways and on the TEN-T network, removing the bottleneck on the three European Corridors.

The Hungarian Government originally planned that in addition to this year’s CEF funds, it would also require 2023 funds for the development of the Southern Railway Ring. It is planned that under the next two CEF calls for proposals, HUF 89.7 billion (EUR 224.3 million) and HUF 137.7 billion (EUR 344.38 million) actions will be submitted to implement the massive rail project in the Hungarian capital. These financial proposals would be applied this year and in 2023 respectively.

“This solution is even more advantageous, on the one hand, there is no need to artificially separate organically related investment elements into two tenders, and on the other hand, the deadline of

2026 is still valid for the projects won in this year’s tender, and 2027 for the next years, so the project can be completed on time with greater certainty,” Budapest Development Agency (BFK) says.

In March 202, BFK announced the Grimshaw Architects-led consortium the winner of Nyugati underground station design contract. The station will be transformed into a two-storey multimodal passenger hub providing transport connections to the capital’s urban transport system and its rail capacity will be expanded by 13 new tracks to accommodate the suburban, national and freight transport. The project also includes the construction of a tunnel – the main component of the project – connecting the Kelenföld station (in Buda) to Nyugati (in Pest). Under the project, the existing Déli station will be moved underground and will become a transit station. Currently, Déli station is a terminal. On the 4.5 km tunnel only the passenger trains will run on an electrified double track. It is estimated that 24 trains per hour and direction will operate the new connection creating additional capacity for suburban and long-distance services.

The rail network of Budapest and its metropolitan area includes suburban lines 8 of which are also used by long-distance and international trains and in addition, there are three non-interoperable suburban lines (the so-called HÉV lines) crossing the city borders.

It should be noted that the city’s public transport capacity meets transport demand, but the main problem is that road transport is dominating the outer area of Budapest where population has recorded significant increase which put pressure on the current transport capacity. During an interview, Dávid Vitézy told Railway PRO that analysis underlines that 6 out of 10 people are using public transport in Budapest, while only 3 out of 10 use these services in the metropolitan area.

To develop the rail transport system, the authorities recently approved the rail strategy of Budapest worth EUR 10 billion which will be implemented with European funding and from Hungary’s Resiliency and Recovery Plan.

For Hungary, the European Commission has selected five projects under the CEF2 calls for proposals for which EUR 26.54 million is the maximum EU financing contribution. Besides the Nyugati station project, the Ministry for Innovation and Technology will receive EUR 8.5 million EU funding for the elaboration of the studies concerning the preparation of environmental, economic and engineering documentation for Amber RFC upgrade. The project covers the preparation of the necessary studies for upgrading the 158 km long railway line Hegyeshalom–Szombathely-Zalaszentiván, part of the Comprehensive Network and of the Amber Rail Freight Corridor (Amber RFC).