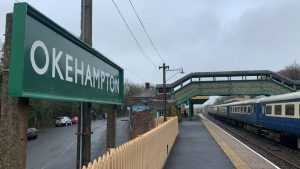 Network Rail has announced that regular passenger services on the Dartmoor Line between Okehampton and Exeter will officially reopen on November 20, for the first time in nearly 50 years. The railway will also provide better access to and from the wider West Devon and North Cornwall areas.

The route will connect Exeter St Davids, Crediton and Okehampton providing a launchpad for visitors to explore Dartmoor and regional links for local commuters. Around half of services, including at peak times, will also carry on to Exeter Central. The reopening of the route is expected to boost local businesses, the tourism sector, and provide greater access to education and work for thousands of people who live locally.

Network Rail has completed the project within 9 months since the financing approval and has laid 18 km of new track, installed 24,000 concrete sleepers and 29,000 tonnes of ballast. Repairs have also been made to 21 structures along the route including 4 bridges and a range of works including vegetation clearance, earth and drainage works and fencing are ongoing in preparation for the return of regular services.

The re-opening of the Dartmoor Line has received a GBP 40 million (EUR 47 million) funding from the Department for Transport that, together with its partners, accelerated the delivery of rail passenger services. As the Government continues its overhaul of the railways following the Williams-Shapps Plan for Rail, more lines and stations will be re-opened.

The line between Exeter and Okehampton originally opened in October 1871.  The last regular train service operated in 1972, when passenger services were withdrawn by British Rail.  Since 1997, the line has only been open during the summer.