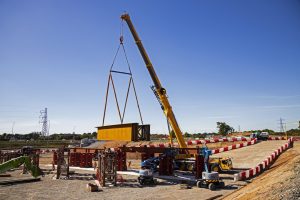 Cleveland Bridge has produced twenty-four massive steel girders for HS2 project that will form part of the first bridges of the high-speed railway line.

Sixteen of the 20 metres girders have been pre-assembled at the company’s factory as 50 tonne pairs to minimise the amount of delivery vehicles on the road. The girders were transported to the site of Interchange station in Solihull and they will be assembled in a purpose built area using 8,500 high-strength bolts, to make a 65 metre single span.

The assembled steel bridge structure, which will span the M42, will work in conjunction with a composite concrete deck to provide the overall bridge structure. Once the fully-decked bridge has been completed, this 2,750 tonne structure will be moved into its final position over the motorway.

The two modular bridges are being constructed near the site of the new HS2 Interchange station, forming new connections to a triangle of land formed by the M42, A45 and A452. They are the first permanent structures to be built by HS2 and will span the M42 and A446 respectively, with a further two bridges to take roads over the new high speed line. They are part of a remodelling of the road network in the area to divert the roads out of the way of the new HS2 line and at the same time connect the current road network to the new station.

“It’s fantastic to see construction work stepping up a gear on the first permanent structures to be built by HS2, and to see how this work is creating jobs and opportunities for people right across the country,” Bill Price, HS2’s Head of Enabling Works, said.

In 2019, Cleveland Bridge won the contract to supply 1,130 tonnes of steel girders for HS2 used for the project’s early works joint venture LM – Laing O’Rouke / Murphy, which is constructing four modular bridges at the site of the new Interchange station in Solihull.