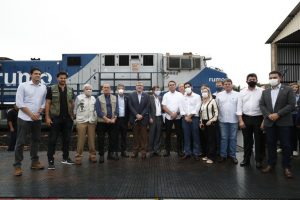 For this section, which included the construction of four bridges between the states of Goiás, Minas Gerais and São Paulo, Rumo has invested Reais 711 million (USD 124.18 million) completing the works ahead of schedule.

“We are inaugurating the section of North-South railway, a private initiative. The rail transport has been forgotten for decades and we suffered a lot. Other achievements will come with Rumo and other companies,” Jair Bolsonaro said at the inauguration in São Simão, on March 4. 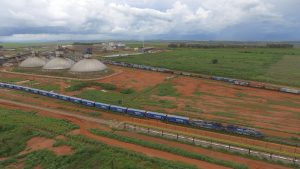 At the ceremony, the transport services started provided by Rumo under a Reias 2.7 billion (471.58 million, in 2021 prices) contract awarded in 2019 for the central and southern sections of the North – South line (Norte-Sul). The 30–year contract covers 1,537 kilometers between Porto Nacional and Estrela D’Oeste, municipality in the state of São Paulo, which will be fully operational by the end of July 2021. Before Rumo won the auction, only the northern section between Açailândia and Porto Nacional was in operation.

“The investments in railways will increase the participation of the modal in the Brazilian transport system from 15% to 35% in the coming years and will boost the economy,” the Minister of Infrastructure said.

The line will benefit three terminals to serve the southwest region of Goiás, east of Mato Grosso and the Triângulo Mineiro. During the ceremony, the São Simão terminal was opened, which is the first one to become operational, being managed by Rumo and Caramuru Alimentos, which have invested in the construction of the project. The terminal will is expected to handle more than 5.5 million tonnes of agricultural products per year. In Rio Verde, the new terminal is scheduled to enter operation at the end of this first semester, while the one in Iturama, at the end of the first semester of 2022. 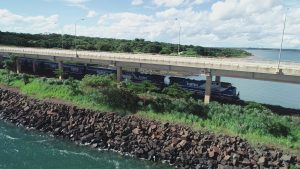 The North – South railway was designed to be the backbone of the national railway system, integrating the national territory and contributing to reduce the logistical cost of freight transport in the country. According to the National Agency of Land Transportation (ANTT), the line has a potential to attract 22.73 million tonnes by 2055.

The railway line will reduce the travel time and costs and allow better services to transport agricultural products from the Central-west Brazil to the Port of Santos.