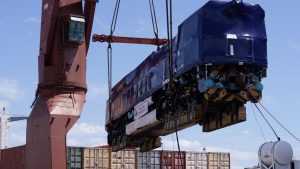 Bowen Rail Company, part of the Adani Group, has received the first 10 GT46CU-ACE Gen 3 Progress Rail locomotives that arrived at the Port of Townsville, Queensland.
The new locomotives will be used for coal transport from Bravus Mining & Resources’ Carmichael Mine, in Queensland.
The rail operator has launched a haulage business to service the Abbot Point export terminal on the Queensland coast, close to the Galilee Basin coal reserves.
The arrival of the locomotives marks another milestone for the new regional rail company as the business prepares for operations.

The locomotives were officially welcomed into north Queensland by the Federal Minister for Resources and Water, Keith Pitt, Queensland Minister for Resources, Scott Stewart, and the CEO of Bowen Rail Company, Trista Brohier.
“Our locomotives and wagons have arrived, we will soon get on with transporting coal from the Carmichael Mine to North Queensland Export Terminal,” Brohier said.
Bowen Rail Company’s fleet of locomotives are delivered by the Progress Rail business and are the most technologically advanced freight locomotives Australia has ever seen.

The modern locomotives are equipped with modern safety technology which considerably improves the braking system and facilitates the operation of the vehicle, while providing high safety for the drivers.
They are fitted with intelligent IT systems that enable the train operation from anywhere Queensland and Australia and they are also fuel efficient, using 10% less fuel than the existing diesel trains operating across Australian rail network.
Bowen Rail Company will provide transport services with four trains per day by the end of the year and each train will contain 2 locomotives and 86 wagons forming a 1.4 km-long trains carrying 7,300 tonnes.

Bowen Rail was launched in August 2020 and is the first new rail freight operator established in Australia in the last decades.
The recruitment is underway for train drivers and other roles including supervisors, maintenance planners, trainees and corporate positions which will see more than 50 new people employed for Bowen Rail Company throughout this initial phase.
Bowen Rail Company today announced another Carmichael mine and rail Project contract, which has gone to local Bowen company Hillery Group to construct a new rail yard that will create more than 100 jobs during construction for regional Queensland.
The completion of the yard is not required to start operation.

The AUD 15 million (USD 10.86 million) rail yard will be an important part of the business’ long term operating plan but is not required for the company to commence rail operations later this year.

Adani had signed more than AUD 1 billion (USD 724.4 million) in contracts for the development and construction of the Carmichael mine and rail project as of early 2020. The rail project covers the construction of a 200 km narrow gauge line to connect Carmichael Mine and North Queensland Export Terminal to the existing rail infrastructure. The rail line links the Galilee Basin in central Queensland to existing infrastructure to facilitate coal exports for Galilee Basin coal mines.