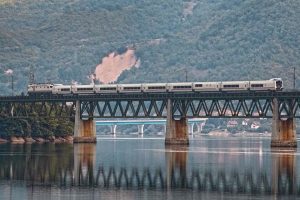 A joint venture comprising Ardanuy Ingeniería, Eptisa and IPSA was appointed to carry out the design and construction work studies for Doboj-Rasputnica Miljacka railway, part of the on the Bosnian Corridor Vc on the Trans European Network – Transport (TEN-T).

EUR 3.6 million is the value of the contract which is expected to be completed within two years.

Under the contract, the JV will be responsable for the design and integration with TEN-T of 172 km divided into two main sections. The first one includes the 95 km Srpska Kostajnica – Doboj – Maglaj – Jelina double track and 77 km of Jelina – Zenica – Podlugovi – Rasputnica Miljacka single track section.

The Ardanuy Ingeniería – Eptisa – IPSA joint venture will review the conceptual design with the relevant legislation and spatial plans, will have to deliver the premilinary study for the optimisation of the line alignment including consideration of connections to adjacent railway sections, will provide the documents for obtaining conformities and permits, will elaborate the environment impact assessment and will prepare the tender documentation for the reconstruction of the railway line.

On Bosnian Corridor Vc there are seven modernisation and reconstruction projects to be implemented with a total value of over EUR 1 billion.

The authorities intends to rehabilitate the existing railway infrastructure and to construct new rail links such as Visoko-Konjic rail connection.

The railway link along the Corridor Vc comprises a 428 km line connecting Šamac on the Bosnia and Herzegovina side of the border to the Ploče Port in Croatia. 24% of the country’s freight transport is carried on the Vc railway Corridor, reaching 120 million tonnes, according to World Bank report published in 2018.

The importance of the Corridor Vc would be increased if the container transport of goods at the port of Ploče are to be diverted to the railway transport.