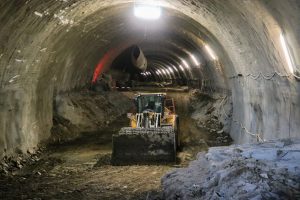 The 600-m rail tunnel is the shorter of the two tunnels being built on the line Sudoměřice – Votice with modernisation works including the 840-metres Mezno tunnel, of which 350 metres being bored with a daily average of 2 metres.

The modernisation of the Sudoměřice – Votice line is one of the final projects on the Czech Rail Transit Corridor IV which connects Germany and Austria through Děčín, Prague and České Budějovice. Besides the two tunnels, a second track will be added to the current single-track section as well as a new railway station Červený Újezd.

This route which will mostly deviate from its current path will be by 2 km shorter than the existing section bringing shorter journey times of express trains between Prague and Tábor down to one hour. OHL ŽS is performing the construction works, which has also built the previous section between Tábor – Sudoměřice and the Sudoměřice tunnel.

EUR 284 million (CZK 7.16 billion) is the total costs of Sudoměřice – Votice modernisation. A request for co-financing this project under the operational Programme Transport 2014–2020 from the EU Cohesion Fund was submitted at the end of 2017. In case of its approval, the EU contribution could amount to EUR 204 million (CZK 5.15 billion). National financing is assured by the State Fund for Transport Infrastructure.

The project will be completed by 2022.