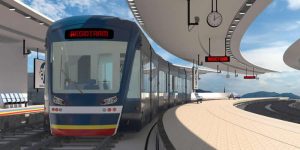 On January 7, the government of Cundinamarca Department, a district of Bogotá, has signed with China Civil Engineering Construction Corporation (CCECC) a Pesos 3.43 billion contract for the Regiotram de Occidente (Regiontram of the West), the new light rail line in Bogotá.

The concession contract of Regiotram, signed for a period of 26 years, envisages the design, construction, financing, operation and the supply of the rolling stock, including maintenance services and rail systems.

The project comprises the construction of a 40 km LRT line connecting Bogotá with the municipalities of Sabana de Occidente region, such as Funza, Mosquera, Madrid and Facatativá. The LRT will be served by 17 stations, of which 8 in Cundinamarca and 9 in Bogotá.

The construction works will take 4 years and the commercial operation are expected to be launched in 2024. The route will be developed mostly on the existing railway corridor in the Sabana de Occidente region and will connect with the first metro line of Bogotá.

“Regiotram will be constituted as a strategic mobility solution for the inhabitants of the Sabana Occidente region who will see a significant improvement in their quality of life thanks to a significant reduction in travel time between the west and Bogotá,” said theVice Minister of Transport, Juan Camilo Ostos Romero. The LRT line will reduce travel time to only 48 minutes from Facatativá to downtown Bogotá.

The project will have a total contribution of Pesos 1.91 billion from country’s budget and Cundinamarca government, with Pesos 1.32 billion coming from the national sources, while the Cundinamarca authorities will cover the investment with Pesos 594 million.