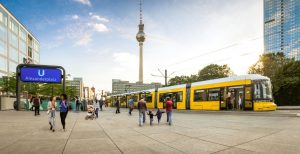 Bombardier Transportation has delivered the 200th Flexity Berlin tram which will enter services on the network operated by Berliner Verkehrsbetriebe (BVG). The city is expecting another 31 low floor trams.

The tram is equipped with air-conditioning system, is barrier-free accessible vehicle and meets the requirements for passengers with reduced mobility.

Bombardier will deliver a total of 231 Flexity Berlin trams to BVG, of which 200 consecutive trams have a length of around 8 km. This corresponds, for example, to the distance from Zoologischer Garten to the Eastside Gallery.

“The Flexity Berlin tram was developed in close cooperation with BVG. Over the years, the Flexity fleet has covered 65 million kilometres, enough to go to the moon and back 84 times, it’s quite impressive,” said Dirk Wunderlich, Head of Sales and Delivery for German Cities at Bombardier Transportation.

Bombardier has a 30-year partnership with BVG. Since 2008, the Flexity trams have been running on Berlin network covering 65 million kilometres. “We’re proud to make a meaningful contribution towards more sustainable transport in the booming German capital,” said Michael Fohrer, Head of Bombardier Transportation Germany.

1,000 Flexity trams already operate in 42 German cities and over 5,000 Bombardier trams have been ordered or are already in successful revenue service in cities around the world.

Recently, Flexity trams for Düsseldorf received the authorisation to operate the network. 59 Flexity high-floor trams for the entire Rheinbahn network will be delivered. At the beginning of 2020, Dresden has unveiled a full-sized mock-up of the Flexity tram. Dresden ordered 30 Flexity trams with an option for 10 additional vehiccles, under a EUR 197 million contract.