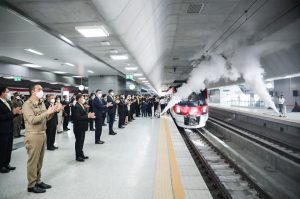 Prayut Chan-o-cha, the Prime Minister of Thailand, has launched the three-month trial period of the Bangkok Red Line via video conference on august 2, 2021.

The ceremony was held at the newly-constructed Bang Sue Central Station in Chatuchak, Bangkok, where the Minister of Transport Saksayam Chidchob, and the State Railway of Thailand (SRT) governor Nirut Maneephan, Japanese ambassador to Thailand Nashida Kazuya and the chief representative of JICA in Thailand, Morita Takahiro attended.

The total length of the line is 41 km linking Rangsit in the northern area of Bangkok and Taling Chan in the western part of the capital. 26 km of the MRT line runs from Bang Sue to Rangsit and Bang Sue Stations, bringing passengers to the north through the 10 stations. This section will link the two terminal stations within 25 minutes. The line has also a 15 km-long elevated section served by 3 stations to the west direction from Bang Sue to Taling Chan. On this section, the passenger will travel 15 minutes.

The passengers will be able to run for free during the trial period, until November, when the Red Line is expected to enter commercial operation. During trials, the service will operate every 30 minutes between 6:00 AM and 8:00 PM and every 15 minutes during rush hour a 78 trips per day will be made, accommodating 1,710 passengers per trip on the Bang Sue-Rangsit section and 1,200 passengers per trip on the Bang Sue – Taling Chan section.

The Bang Sue Central Station is the newest train station constructed in Thailand and country’s new main railway station. Construction works started in 2013 and were completed this year. The station, which is also known as Grand Station, has a total usable area of ​​298,200 square metres and consists of a total of 3 floors. The first floor, which has an ​​87,200 square metres area, is a ticketing area, shops, food courts and offices, waiting area and is offering the connection with the Blue Line. With an area of ​​​​58,900 square metres, the second floor benefits 8 long-distance train platforms and 4 platforms for the Red Line suburban trains. The ​​58,900 square metre-area comprises the third floor providing transport links to the airport and high-speed rail network through the 12 platforms. In addition, there is also a mezzanine floor that serves as a shop area and a control room. The new station also provides 1,681 parking spaces and 19 parking spaces for the disabled people.

The Bangkok Red Line will provide fast, modern and comfortable connections in the Bangkok metropolitan area reducing the travel time, the emissions and the congestion across the city.

The Prime Minister said that the government has formulated a 20-year national strategic plan which started in 2018 and will be implemented until 2037, which includes the development of the transport infrastructure focusing on heavy rail and mass transit train systems in Bangkok and across the country. The strategy also includes the development of double-track lines and the high-speed rail network with the first phase running on the 251 km line from Bangkok to Nakhon Ratchasima in northeastern Thailand. This high-speed connection will allow trains to run at a speed of 250 km/h and is expected to be opened in 2026 when it will serve three airports.