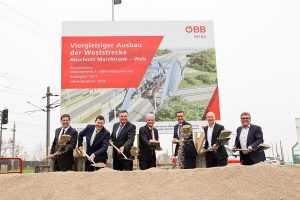 Austria has launched the works for the expansion of Marchtrenk – Wels rail section on the Western Line. According to the ÖBB framework plan 2022-2027, the costs of the project amount to EUR 277 million and are financed by ÖBB-Infrastruktur, the state of Upper Austria and EU funds. The project has been selected under a EUR 2.1 billion investment programme announced in January which includes EUR 265 million budget for rail projects in Upper Austria.

The third track will enter operation at the beginning of 2026 and the fourth track will enter services in 2027. “Within six years, we will create the urgently needed capacities to push forward the shift from road to rail,” ÖBB-Infrastruktur CEO Franz Bauer said at the ceremony.

Under the project, two old railway bridges on the A25 motorway will be replaced by three new bridges fitted with modern noise protection.

Marchtrenk train station will enter fundamental modernisation programme which includes the construction of a new platform with raised platform edges which will ensure that passengers can board local trains comfortably and without barriers. A lift will be installed to provide passengers access to the platform and existing Park & Ride facility will be expanded by 22 car parking spaces and 40 bicycles.

“With the four-track expansion of the Marchtrenk – Wels rail section more capacity for additional trains enables more frequent passenger traffic and better framework conditions for rail freight traffic to shift from road to rail. Passengers as well as companies benefit from this, and we are going one step further towards climate neutrality in 2040,” Herbert Kasser the Head of Directorate General II – Mobility of the Austrian Government.

The western route between Vienna and Salzburg has been continuously expanded to meet the increasing demand in passenger and freight transport. The Western Line between Vienna and Linz Kleinmünchen already has four tracks, and the Marchtrenk – Wels rail section upgrade will eliminate the current two-track bottleneck between Linz and Wels providing more capacity for freight and passenger traffic, better selection of regional and express train services as well as modern and accessible railway stations.