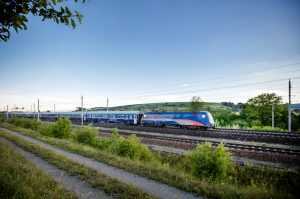 The Council of Ministers approved the ÖBB framework plan 2022 – 2027 with a EUR 18.2 billion investment for the expansion and maintenance of the Austrian rail network.

Over next six years, EUR 3 billion will be invested annually to provide an extended and modernised infrastructure which will bring an important contribution to the climate protection,  will provide high quality transport services for passengers and will play an important economic engine for Austrian companies.  Compared to 2020, the ambitious infrastructure programme is increased by EUR 700 million.

“The largest railway expansion package in the republic will be topped up again. (…) This is an important building block for more climate protection. Because a modern network and a cheap KlimaTicket make public transport more attractive than ever before. And every kilometre by train protects our climate,” Leonore Gewessler the Minister of Climate Action said.

With the expansion and quality assurance of the rail network, the prerequisites will be created to allow more trains on the rail network providing better and faster connections for rail travelers.

In addition, more capacities for freight transport will be created allowing longer and heavier trains to run on the network, ensuring the competitiveness compared to the road transport.

The strategy will be also focused on the digitalisation of the sector increasing the safety and efficiency of the rail operations. For passengers, ÖBB is also optimising the mobile network along the routes. In order to provide travelers with up-to-date information, investments are also being made to digitalise the customer information and train safety systems.

Under the investment, ÖBB will also continue the electrification programme and the increase of attractiveness of the regional rail connections.

“The new master plan will make rail travel in Austria even better and more efficient. Investments in the large main routes bring faster connections between the large metropolitan areas of Austria. In addition to the large main routes, the regional railways will be made even more attractive and electrified. This makes switching to rail more interesting in rural areas as well. [This is] a gain for the passengers and for the environment,” the CEO of ÖBB Andreas Matthä said.

This spring, ÖBB has announced that until 2026, EUR 25 billion will be invested to modernise and develop the rail system which includes rail infrastructure and clean energy projects as well as rolling stock renewal.