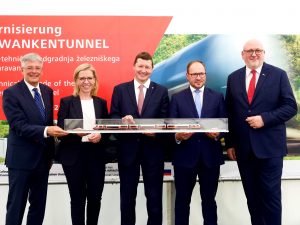 Austria and Slovenia have inaugurated the reopening of Karawanken tunnel offering that was completely closed between October 2020 and July 2021 due to safety and technical upgrade works.

The tunnel, which has been in operation since 1906, now meets the highest technical requirements and increased performance following a EUR 140 million renovation investment. ÖBB invested around EUR 73 million, while Slovenia provided EUR 79.3 million. EUR 49.2 million was covered from the European funds through the Cohesion Fund.

“More rail means more climate protection. With the Karawanken tunnel we can open an important connection which is completely renovated and with meets the highest technical standards. This tunnel connects Austria with Slovenia and it stands for climate protection and the future that we are heading into together,” Leonore Gewessler said at the ceremony.

The project covered the renovation of the infrastructure from Rosenbach to Jesenice, southern side of the Karawanks. The 12.3 km project length included 8 km of tunnel, 26 km of tracks, 31 km of fiber optic cable and 2 GSM-R stations. Due to the installed modern control and safety systems, the trains will run at 120 km/h from allowing more frequent train services. 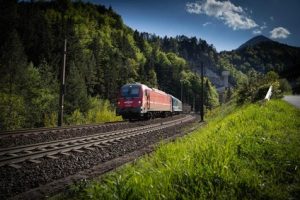 “Ensuring a better rail connection to the rest of Europe is one of the important visions of the Ministry of Infrastructure, because only by concentrating on rail transport can we achieve our ambitious environmental goals. With the reopening of the rail traffic through the Karawanken tunnel, we have taken a big step towards making traffic between the two countries smoother and improving conditions for business and passengers,” Jernej Vrtovec said.

The Karawanken tunnel is situated under the Rozca mountain between Rosenbach in southern Austria and Jesenice in northern Slovenia. It represents an important rail link between the southern German and Austrian economic areas and the Adriatic ports of Koper (Slovenia) and Rijeka (Croatia).