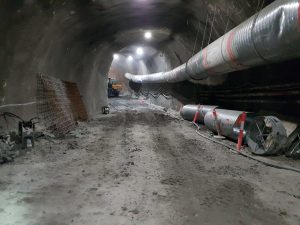 The construction of New Zealand’s deepest railway station is celebrating a significant milestone with the project pouring the last concrete to complete the first underground floor of Auckland City Rail Link Karangahape station.

The floor at the Mercury Lane entrance to the station is one of five that will carry people to and from the platforms 25 metres below ground.

“It’s great to see a station that’s going to have a huge impact on the Karangahape Road area slowly taking shape. There’s been some pretty intense work in a confined central city area to complete the floor successfully,” Jonathan Hill, the Karangahape Station Manager for the Link Alliance said. 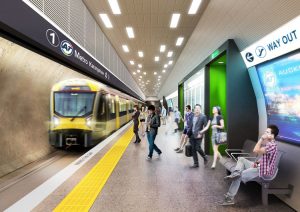 The excavation beneath the street level entrance floor and then the construction of the first underground floor has taken 10 weeks. Approximately 9000 cubic metres of material, enough to fill three Olympic-sized swimming pools, was first removed before 880 cubic metres of concrete was poured and some 280 tonnes of reinforcing steel fitted.

Deeper below ground, work on excavating the top heading of the first of the two 223-metre-long platform tunnels is almost complete, and at the station’s Beresford Square entrance preparations are underway to begin pouring the first underground ‘B1’ level of the station. 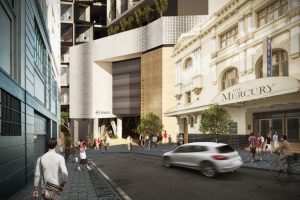 The work on the Karangahape station began in late 2019 with the demolition of the old Mercury Plaza and adjacent buildings. The station structure is due to be completed by 2023 to be followed by the station fit-out, the installation of mechanical and electrical equipment that includes lighting, escalators, lifts, ventilation and communication systems.

The Link Alliance is the contractor for the construction of the stations, tunnels, and rail systems for City Rail Link under a contract signed in 2019.

The NZD 4.4 billion (USD 3.18 billion) Auckland City Rail Link is the largest transport infrastructure project in New Zealand, and it is planned to be completed in 2024.

The 3.45 km link s city’s first underground line which will double the capacity of the rail system. It is estimated that by 2035 the stations will be used by 54,000 passengers per hour at peak travel times, rather than the original estimate of 36,000.