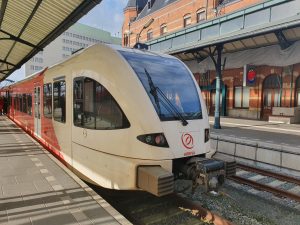 Stadler, the Dutch railway infrastructure manager, ProRail, the Provincie Groningen and Arriva Netherlands, together with 50 local and national dignitaries have together tested the ATO train which can accelerate and brake automatically.

This is the first time that passengers in the Netherlands have been on board an ATO train, ran in Grade of Automation (GoA) 2. Until 17 February, the four partners are running a few test trains specifically for the general public, allowing them to experience first-hand what it is like to travel on an ATO train. The train is running on the railway line linking Groningen and Buitenpost.

To guarantee the train’s safety, it operates under a train protection system and the supervision of a driver.

Testing in the Groningen area started in October 2019 and comprises three parts. The current phase, part 2, involves passengers travelling on an ATO train. The aim of the project is to evaluate the human factors of ATO usage. The project also determines the potential increase in track capacity as well as saving energy, and assesses stop precision, punctuality, speed, safety and comfort.

The diesel-electric powered GTW train is manufactured by Stadler and provided by Arriva Netherlands.