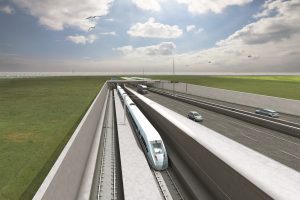 The Danish planning company Femern A/S awarded Atkins a contract to provide consultancy services for the Fehmarnbelt railway tunnel linking Denmark and Germany. The agreement will last eight years with potential for extension.

Atkins will also collaborate with German engineering firm GAUFF, who will focus on the German elements of the new railway.

The tender was launched in May 2019 which had an estimated value of EUR 4 million.

The 18 km Fehmarnbelt tunnel will link will cross the Fehmarn Belt in the Baltic Sea to connect the Danish island of Lolland and the German island of Fehmarn. Featuring a double track electrified railway system and four-lane motorway, the new connection will become world’s longest immersed transport tunnel when completed in 2028.

The new railway connection between the two countries will allow trains to run at speeds of 200 km/h reducing the travel time to just 7 minutes, from currently one-hour ferry travel.