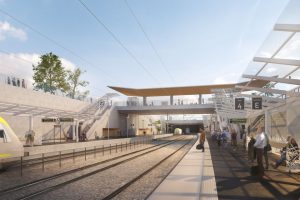 Trafikverket, the Swedish Transport Administration, awarded Atkins a contract to deliver the detailed design and construction support for the 3.1-km Varberg rail tunnel. It will run under the coastal town of Varberg to accommodate the West Coast Line’s expansion to a double track railway, which will increase capacity and reduce travel times for passenger and freight services.

The tunnel is part of an expansion to the country’s 300 km West Coast Line between Gothenburg and Lund.

With other consultants, Atkins has already completed the first phase of project’s design, which included the development of the implementation plan. The next stage involves detailed planning for the construction phase of the new tunnel under a time and materials contract worth an initial GBP 13 million (EUR 15.1 million).

The Varberg tunnel is planned as an 3.1 km long tunnel under central Varberg, with 2.8 km rock tunnel and 300 m concrete tunnel. There will be a new station house with a descent to the platforms, which are situated in an approximately 800 m long concrete trough at the north tunnel portal. In addition, a new freight yard will be built north of Varberg. In total, 7.5 km of new double track will be built.

The West Coast Line is one of the most important railways in Sweden. Its expansion to a double-track railway has been under way since 2015 and currently approximately 85 per cent of the West Coast line has been upgraded. The project, which is performed by the Swiss construction company Implenia, is expected to be completed in 2025.