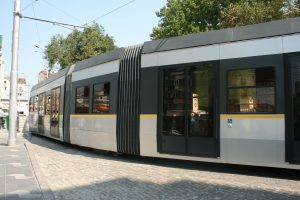 Astra Vagoane Calatori (Romania) – CRRC Qingdao Sifang (China) consortium is the winner of Bucharest tram tender, as announced by the Bucharest City Hall. Within the next few days, the contract for the delivery of 100 Astra-type trams is expected to be signed.

The consortium has submitted an offer of RON 840.9 million (EUR 172.9 million) without VAT, according to the “financial proposal and based on the technical presented proposal”, the City Hall said.

The tender was part of a controversial dispute between the consortium and the Municipality. The Astra Vagoane Calatori – CRRC Qingdao Sifang consortium made an appeal against the announcement of the initial winner of the tender and requested the reappraisal of the offers. In June, the consortium won a legal battle as the National Council for Dispute Resolution asked Bucharest City Hall to reassess the submitted offers, which was in favour of the Romanian – Chinese consortium.

Initially, the City Hall assigned Durmazlar as the winner of Bucharest tram tender that was invalidated by the National Council for Dispute Resolution in December 2019.

In December 2018, the Municipality has launched the tender for the procurement of 100 new trams at an estimated value of EUR 174 million (RON 845.68 million, excluding VAT). In January 2019, the Municipality had to suspend the procurement procedure at the request made by the National Council for Dispute Resolution following the admission of a complaint advanced by a rolling stock manufacturer against the attribution documentation.

According to the tender, the contract will have a duration of 37 months. The winner of the tender should deliver the first tram within nine months after the contract is signed.

The new tramways will run on eight lines on the Bucharest network. They will have an integrated IT system that will include travel, video surveillance, Wi-Fi, audio-visual information system for passengers as well as infotainment.

The new vehicles will have a capacity of 220 passengers of which 56, seated. They will have special places for passengers with reduced mobility and their access will be made using ramps or sliding ramps.
Trams must be 36 metres long, with 100% low-floor and five double doors. The contract also includes the provisioning of spare parts, consumables, commissioning services, maintenance, service and troubleshooting during the warranty period.