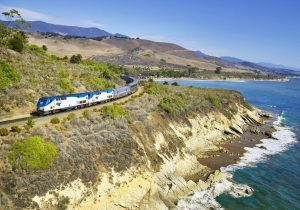 Amtrak has announced the “beginning a new era” for more sustainable transport options and intends a 40% reduction of its greenhouse gas emissions by fully transitioning all electricity to carbon-free sources by 2030.

“The United States has the opportunity to make use of an unparalleled asset – our railway infrastructure – to support an expanded network of low-carbon, high-capacity intercity passenger rail that can reduce this country’s carbon emissions. Creating a future where rail is operated on clean energy, Amtrak is stepping up to President Biden’s Climate Change Commitment and the FRA’s challenge as we aim to transition to carbon-free electricity to power our trains,” Amtrak CEO Stephen Gardner said.

The company is ready to provide its passengers sustainable transport services which will significantly reduce the emissions and is promoting rail transport as the best option for environmentally friendly mobility compared to road or air transport. Amtrak emits up to 83% fewer greenhouse gases per passenger compared to driving and up to 72% fewer than flying. The company is 46 percent more energy efficient than traveling by car and 34% more energy efficient than domestic air travel on a per-passenger-mile basis.

From 2010 to 2019, Amtrak reduced greenhouse gas emissions by 20%, which is equivalent to powering the homes of the entire population in Richmond, Virginia. Through several key initiatives like energy efficiency upgrades, using as little fuel as possible and running more efficient locomotives, Amtrak continues to reduce fuel and energy use year-over-year.

Over the course of the last decade Amtrak has implemented new technologies and changed employee behavior which resulted in reducing the greenhouse gas emissions by more than 414,054 metric tonnes of CO2e, equivalent to 90,048 passenger vehicles driven for one year.

Acknowledging the impact of climate change to local communities, Amtrak is also developing a company-wide climate resilience plan to ensure the company will continue to provide reliable and safe service as climate conditions change.

As a part of its more sustainable transport vision, the rail operator is acquiring the new ALC-42 Charger locomotives manufactured by Siemens which will reduce air pollution and greenhouse gas emissions compared to the legacy fleet they are replacing.

As part of its climate change actions, Amtrak has also acquired the new Acela fleet which will reduce the current energy consumption by at least 20% due to the new trains are being lighter.