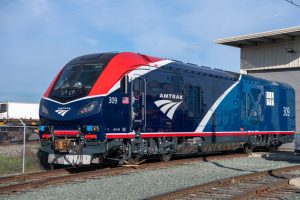 Amtrak ordered from Siemens Mobility 50 additional diesel-electric Charger locomotives which will be manufactured in the US. The two companies have previously worked together to design this locomotive series.

The new locomotives are designated as ALC-42 for ‘Amtrak long-distance Charger, 4,200-horsepower.’ They will primarily replace Amtrak P40 and P42 diesel-electric locomotives, which have a lower top speed and began service under different emissions standards 30 years ago.

The locomotives are more efficient than their 1990’s predecessors reducing the emissions of nitrogen oxide by more than 89% and particulate matter by 95%, while consuming less fuel than the locomotives being retired and reaching a greater top speed – of 200 km/h.

“We’re dedicated to continuously seeking new and innovative technologies that provide solutions to meet transport needs while reducing health and climate impacts. We are focused on being the solution to get people out of cars and planes and onto rail for greater emissions reductions,” Amtrak Vice President and Chief Mechanical Officer George Hull said.

The ordered diesel-electric Charger locomotives will join the fleet of 75 units ordered in 2018 at a value of USD 825 million. In total, the locomotive contract worth USD 2 billion and will allow Amtrak to deliver environmentally-friendly long distance transport services.

The first of the ALC-42’s entered service in February on the Empire Builder trains and are next to be deployed on the City of New Orleans trains connecting with Chicago. Starting with the tenth unit delivered in April, the locomotives will carry the seventh standard paint scheme traveling from California to Delaware.