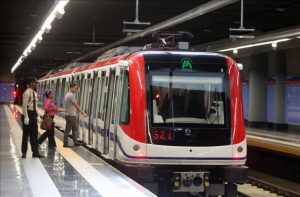 Alstom won a contract to manufacture, supply and commission 8 new three-car Metropolis trainsets for Santo Domingo metro Line 1. The first two trains are expected to arrive at the port of Santo Domingo in approximately 18 months from the signing of the contract.

The international public tender, managed by the Oficina Para el Reordenamiento del Transporte (OPRET), and financed by the Agence française de développement, is a priority project for infrastructure development in Santo Domingo and to increase the transport capacity of the country’s capital city.

The new trains that Alstom is supplying will be able to operate in multiple units, coupled with each other or with the trains of the fleet previously acquired by OPRET, allowing capacity to be adapted to demand. They will be configured in a 6-car version at peak times and 3-car configurations will be made at off-peak times.

The new trains will have the same features, functionalities and characteristics of the Metropolis trains that currently operate in the Santo Domingo metro, such as wide doors, wide corridors and a low floor for an optimal flow of passengers. In addition, the new trainsets will have additional features and technological improvements to enhance the passenger experience and optimise operations and availability, including LED lighting in the passenger area, Wi-Fi connection for the uploading of multimedia files and data transmission to the control unit, as well as improvements in the passenger information and alert system, train control and self-diagnosis systems.

The trains will be manufactured at Alstom’s plant in Santa Perpetua, Barcelona, Spain, and will join the 25 Metropolis trains that Alstom previously supplied to Santo Domingo metro for Line 1 and the 21 Metropolis trains supplied for Line 2, since 2009, for a total of 138 cars.

The Line 1 of the Santo Domingo metro has a length of 14.5 km and is served by 16 stations, providing transport connection on the north – centre – south city axis.