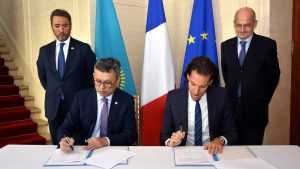 Alstom and the Ministry of Trade and Integration of Kazakhstan signed a Memorandum of Understanding to increase the production localisation of high-tech parts and components.

The cooperation agreement was signed by Bakhyt Sultanov, the Minister of Trade and Integration and Andrew DeLeone, Alstom President in Africa, Middle East and Central Asia. The signing ceremony was held in Paris with the support of the Embassy of Kazakhstan in France.

The MoU also covered Kazakhstan’s transition to a low-carbon economy and the need to work together to create a sustainable mobility infrastructure in the country.

“We have agreed to cooperate in promoting the products of the Nur-Sultan plant in the near and far abroad. We also plan to continue discussing possible ways to increase localisation level in production. Today the localisation of this plant is about 40%. This indicator can be increased due to Kazakhstani producers of metal, plastic and electrical products. Due to this, of course, the cost will decrease, and competitiveness will increase”, the Minister of Trade and Integration said.

For Alstom, the agreement is considered a “testament” of its “commitment to continue finding opportunities of mutual benefit. We are looking forward to growing local know-how and raise export potential of Kazakhstan. Alstom is enabling decarbonisation of mobility throughout the entire value chain, and we welcome the opportunity to accompany our customers on their journey to a carbon-free future” Andrew DeLeone explained.

Alstom is present in Kazakhstan with more than 950 people, two Joint Ventures and has three depots, two plants and a repair centre.

The EKZ plant in Nur-Sultan is focused on the manufacturing of electric locomotives and maintenance and production of on-board transformers, and the second KazElectroPrivod (KEP) plant in Almaty is producing point machines. In 2010, Alstom and Transmashholding entered into an agreement to develop the EKZ facility for locomotive construction that was inaugurated in 2012. The joint company was held by Alstom (25%), TMH (25%) and Kazakh Railways (50%). The three companies signed a contract for the supply of 200 Prima T8 KZ8A and 95 Prima M4 KZ4AT locomotives. Between 2014 and 2016, 20 Prima KZ4AT locomotives were assembled in France. In July 2021, Alstom has rolled out the first Prima M4 KZ4AT passenger locomotive manufactured in Kazakhstan.