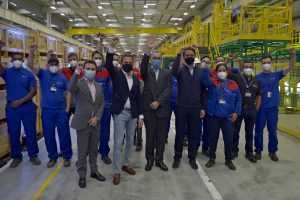 Alstom is expanding its Taubaté plant, in the State of São Paulo, following the signing of multiple national and international contracts for train manufacturing from 2021 to mid-2028.

The French manufacturer will invest EUR 14 million to modernise and adapt the Taubaté factory to be ready to manufacture trains for new projects starting in 2022.

Alstom will open more than 750 jobs in the State of São Paulo for its rolling stock business, with 700 job positions expected to be opened for the company’s industrial unit, located in the city of Taubaté.

To prepare future employees to work in the production of more than 130 trains representing more than 750 cars, Alstom signed a partnership with the National Service for Industrial Learning – SENAI Taubaté. The institution will train 600 professionals starting in January 2022 in areas such as the basics of mechanics and logistics, basics of manufacturing processes and basics of quality and safety. Between November 2021 and January 2023, Alstom or partner companies will progressively hire around 500 professionals trained by SENAI Taubaté to work on the projects.

The main job positions available at Alstom Taubaté are assistants, operators and assemblers.

The high number of job positions aims to execute the contracts for São Paulo projects. One of them, signed with Concessionária Linha Universidade, includes the supply of 22 six-car Metropolis automatic trains for Line 6-Orange. The second contract, signed with Concessionária ViaMobilidade covers the construction and delivery of 36 eight-car Metropolis trains for Lines 8-Diamond and 9-Emerald of the System of Metropolitan Trains of São Paulo.