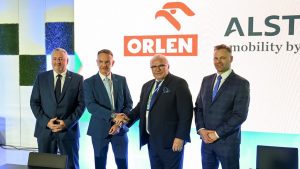 PKN Orlen a Polish energy and fuel provider signed with Alstom a strategic cooperation agreement for the supply of eco-friendly zero-emission trains and hydrogen fuel for public rail transport. The corporation, which is consistently implementing the hydrogen strategy, announced earlier this year, that it will provide the refuelling infrastructure for trains produced by Alstom. The first hydrogen vehicles are likely to roll out on regional lines within two years.

In response to challenges connected with energy transformation, Orlen Group has prepared a Hydrogen Strategy 2030 which defines the company’s goals until the end of the decade and long-term ambitions in four key areas covering the mobility, refining and petrochemicals, industry and energy, and research and development sectors.

The hydrogen strategy assumes the use of hydrogen in urban public transport and railways. To this end, PKN Orlen has already signed letters of intent to cooperate with more than 20 Polish cities and companies that are potential hydrogen recipients.

“I hope that Alstom will also be the first to introduce hydrogen trains to Poland. The signing of the agreement with PKN Orlen is another step towards the transformation of the Polish railway with the use of state-of-the-art global technologies,” Sławomir Cyza, the President of Alstom in Poland, Ukraine and the Baltic States said.

In 2021, at the Polish Railway Research Institute in Żmigród a Coradia iLint hydrogen train started trials to show its potential on Polish rail network.

Last year, an analytical laboratory for hydrogen research and the first hydrogen hub was commissioned in Trzebinia, which is currently producing grey hydrogen for transport, but will eventually produce low-emission hydrogen from renewable energy sources. By the end of this decade, 10 hydrogen hubs are to be operational in Włocławek and Płock, among others.

Meanwhile, by 2025, a hydrogen laboratory will be established at the Research and Development Centre in Płock. It will carry out tests and research on installations in the field of hydrogen production, its quality and purification, as well as storage and transport.

Under the strategy, by 2030 PKN Orlen will invest PLN 7.5 billion (EUR 1.6 billion) to achieve carbon neutrality, translating into a reduction of 1.6 million tonnes of CO2 emissions.