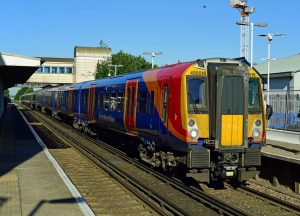 Porterbrook and Alstom have signed a GBP 25 million (EUR 29.15 million) contract to upgrade the Class 458 train fleet, one of company’s most versatile electric train fleets.

Under the contract, Alstom will upgrade the trains to be able to run at a speed of see the trains uprated to a top speed of 160 km/h (100mph). The project also involves a complete upgrade of the passenger saloon to meet the needs of long–distance customers, and reconfiguration of the trains to enable the faster acceleration required to meet established journey times on key routes.

Alstom will undertake this work at the company’s Widnes facility in Cheshire, securing jobs and protecting key skills. The enhanced Class 458 fleet will be based at SWR’s Bournemouth depot.

The announcement follows the decision by South Western Railway (SWR) to extend the leases on Porterbrook’s award-winning Class 458 train fleet until 2027.

“I am delighted that our customer South Western Railway has decided to retain our Class 458 fleet. Partnership is at the heart of our business. To demonstrate this, we will be taking responsibility for the performance of these trains and supporting SWR as they transform South Coast and long-distance services,” Mary Grant, CEO of Porterbrook said.

Porterbrook’s Class 458 fleet of electric trains achieved a record–breaking run of Modern Railway’s ‘Golden Spanner awards’, based on independent industry performance data, in 2009, and from 2012, year by year until 2016.

“This fully refurbished fleet of 458s will provide an even better experience for our customers, while delivering efficient and flexible capacity on our medium range services,” Neil Drury, Engineering Director at SWR, said.

The Class 458 came into service in 2000 and was built by Alstom GEC. A Class 458 has 270 Standard Class seats of which 33 seats are designated as priority seats.