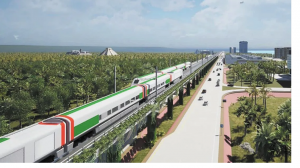 The National Fund for Tourism Development of Mexico, Fonatur, has announced that a consortium led by Alstom is the successful bidder for an open international public tender for the procurement of 42 trainsets for Mayan Train project.

According to Fonatur, Alstom’s proposal met the highest score and the lowest cost compared to the economic proposal of the second offer received. The French company submitted a Pesos 36.56 billion (USD 1.84 billion) bid, with Pesos 890 million (USD 44.7 million) less than the offer submitted by CAF – Rubau consortium.

Under the tender, the winner will be responsible for the design, manufacture, equip, testing and commissioning of the 42 trains, the railway systems necessary including the ETCS Level 1, train protection system, telecommunications, and control systems as well as the construction of maintenance workshops and depots. The consortium will also provide after-sales service and maintenance of the train fleet and equipment and will transfer the know-how. The trains will be assembled at the Cd. Sahagún plant in the State of Hidalgo, boosting national employment.

The first tests of the equipment acquired prior to the operation of the Mayan Train system will be carried out during 2023, in compliance with the calendar that governs the development of the project.

The USD 7.4 billion Mayan Train project covers a 1,500 km of rail system in Yucatan peninsula, crossing five principal Mexican states – Yucatan, Quintana Roo, Campeche, Tabasco and Chiapas. The rail system will boost passenger and freight transport and will open up a series of opportunities for commercial and social development, for the benefit of the inhabitants, local businesses and tourism sector.

The project, included in the National Development Plan (2019-2024) has been launched in 2018 and is divided into seven sections.