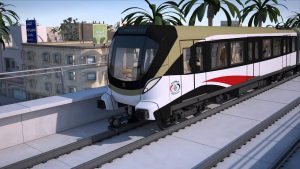 The Iraqi Ministry of Transport and an Alstom-led consortium together with Hyundai Engineering & Construction signed a Letter of Intent to define a framework for all the appropriate steps to accelerate the implementation of the Baghdad elevated train (BET) project.

“We are extremely delighted to sign the Letter of Intent and develop our cooperation with the Republic of Iraq. We believe that with this important project together with the Iraqi government we will implement our latest innovative technologies to improve the mobility environment in Baghdad and reduce the current traffic congestion”, said Müslüm Yakisan, Senior Vice President for the Africa, Middle-East and Central Asia region at Alstom.

The Baghdad elevated train project is a 20 km elevated metro served by 14 stations. The metro system will connect Al-Khadumia, AlEtafia, Alsarafia bridge Al-Mustansirya, Wazyria and AlShab on a 16 km-long line, and AlEtafia AlMuthana airport to Al-Alawi on a 4-km section.

According to an estimation, the project would have a cost of over USD 2.5 billion.

In December 2017, Alstom has signed a Memorandum of Understanding with the Government of Iraq to develop the light rail projects in Baghdad and Basra, a city with a population of more than 2.5 million. The MoU covered the Baghdad metro with the supply of all construction works, the needed systems and train fleet delivery. The Basra metro project would provide the transport link from North to South, from Zubair to Shat Alarab and from East to West, from Karma to the Desert. It would consist of two elevated metro lines totalling 60 km, the construction of 30 stations and two depots. Each metro line is expected to have 30 km and 15 stations, included one train depot.