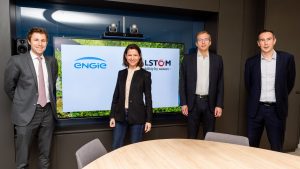 Under the terms of this partnership agreement, Alstom will design a hydrogen solution based on a high-power fuel cell system that can power electric locomotives on non-electrified sections. Engie will supply the renewable hydrogen for this solution via the deployment of an innovative supply chain.

This partnership will provide a low-carbon, zero-emission solution in response to climate, environmental and public health issues, including on non-electrified branch lines and sidings. The target market is the major European rail freight countries.

The two companies share the ambition to put hydrogen at the heart of rail industry decarbonisation. This has already been successfully demonstrated during the Coradia iLint train test, organised in March 2020 in the Dutch Province of Groningen, where renewable hydrogen was used to refuel a passenger train.

Alstom has been working since 2013 on the launch of world’s first hydrogen passenger train, the Coradia iLint which entered commercial service in 2018 in Germany and to date 41 trains have been ordered by two German Landers and successful trials have taken place in Austria, the Netherlands, in cooperation with Engie, Poland, Sweden, and France. By developing hydrogen locomotives, Alstom will revolutionise the rail freight sector and will pave to way to a zero-emission rail transport.

“Our ambition is to accelerate the adoption of hydrogen power in the rail industry by developing innovative solutions that help green heavy-duty mobility operations like rail freight. In order to help drive the evolution of the hydrogen rail sector we need to gather stakeholders, and this is exactly why we have decided to partner with Engie, Raphaël Bernardelli, Vice President, Corporate Strategy, at Alstom said.

Engie’s ambition is to develop of an industrial-scale hydrogen economy which will also support the industry and mobility players to achieve their carbon neutrality objectives. By 2030, Engie is committed to develop 4 GW of renewable hydrogen production capacity, to have 700 km of dedicated hydrogen network and 1 TWh of storage capacity, and to manage more than 100 refuelling stations.