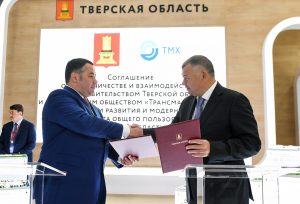 The agreement was concluded for a period of five years. Both sides agreed to develop all passenger transport modes, including the modernisation and expansion of the infrastructure, the renewal of the rolling stock and the digitalisation of the services and activities. The collaboration between TMH and Tver authorities also covers the development of effective conditions and mechanisms to promote the development and modernisation of public transport.

Under the programme an efficient mechanism to attract more investment will be created, which will determine the development of the entire region and its economic and industrial activities.

As TMH owns the Tver Carriage Works (TVZ), specialised in the production of locomotives, passenger cars and electric trains and has the needed experience in the tram manufacturing, the Russian rolling stock producer will be actively involved in all the projects Tver Region will launch. At the facility, TMH employs thousands of workers living in the city.

A modern regional public transport system is essential for Tver agglomeration which is currently served by 471 modern – class buses running on 85 routes, used by 18,000 passengers per day.

“Now we are starting to implement a new stage of creating a new model on the development of region’s public transport system. In summer, the programme will be launched by beginning the works in 4 more urban agglomerations of our region. We also plan to start implementing a project to modernise the tram traffic in the city of Tver this year,” the Governor of Tver Region said.

For Tver city, the authorities plan to reconstruct the tram tracks, to modernise the depot and the substations and to acquire new comfortable and energy-efficient trams. In 2015, the city has put into commercial operation five 71-911 City Star low-floor trams, manufactured by Tver Carriage Work.

Transmashholding has a successful experience of participating in the public transport projects on the basis of concession agreements. One of its landmark projects on this field covers the renewal of Moscow’s tram fleet and the organisation of city’s service at the depot. This gives Tver the “opportunity to implement at the highest quality level a project to modernise the entire public transport system in the metropolitan area. The success of the project will mean an improvement in the quality of life of our colleagues, their families and friends,” the President of TMH said.