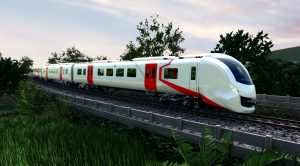 The battery packs will be manufactured at Hyperdrive’s Hyve facility in Sunderland, and then installing them 32 km away at Hitachi Rail’s Newton Aycliffe train-building factory.

The potential market for Hyperdrive and Hitachi’s battery technology is over 400 trains. Hitachi has identified its fleet of 275 trains as potential early recipients of the batteries for use in the UK, as well as installing them on new metro and intercity trains that will be needed in the coming years to replace ageing diesel fleets.

As the government is setting ambitious decarbonisation targets, a widespread adoption of battery train technology could be a major boost for industry in the UK. This is creating a market for Hyperdrive to increase its manufacturing capability up to 30,000 battery packs per year and double the number of jobs at its Sunderland factory.

The development of the UK’s first independent battery pack manufacturing facility will drive costs down and for the first time offer domestic production of batteries for rail, automotive, construction and energy sectors.

The two companies intend to create a battery hub in the North East, accelerating the production of battery packs for trains that can be mass-produced to provide emission-free power for the trains across the UK. “It’s fantastic to see two innovative companies joining forces to create good quality manufacturing jobs across the North East. An emission-free public transport system is vital if we’re to build a stronger, greener economic recovery that spreads prosperity and opportunity across the UK,” Business and Industry Minister, Nadhim Zahawi said.

In 2016, Hitachi has introduced one of the world’s first regional battery trains in Japan.

Currently, two-thirds of UK’s railway network is not electrified and the trains are using 469 million litres of diesel each year, with an annual CO2 emission of 2.4 million tonnes CO2.