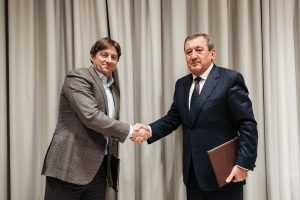 Kirill Lipa, the director general of Transmashholding (TMH) and Rakhmonbek Usmanov, the director of Tashkent Metro signed a memorandum of cooperation for the development of city’s metro system.

The agreement signed on November 12 will be performed for a period of ten years, starting 2022 until 2032.

Within the framework of the memorandum, the parties intend to interact in areas related to the development of infrastructure, rolling stock renewal, increased passenger traffic, and creating favorable conditions for the implementation of science and technology solutions and systems. In this context, the development plans for Tashkent Metro cover the implementation of a digital process control system using modern information technologies, the improvement of the security systems, introduction of microprocessor control systems and traffic dispatching.

The projects also involve the integration of public transport systems providing increased access and connections to increase the availability and demand for the metro transport.

The introduction of a system for the provision of trade and advertising services on the territory of the metro, due to the technical equipping of the metro infrastructure with digital solutions, the creation of a logistics centre for the integration of suburban, urban passenger transport and the metro system, as well as the introduction of a professional training system are also part of the Tashkent Metro modernisation plan.

Metrowagonmash, part of TMH, has delivered the trains for the metro system since its opening in 1977. In 2018 the two companies signed a contract for the delivery of five 4-car metro trains and in 2021 Tashkent Metro ordered 10 four-car metro trains equipped with asynchronous electric traction motors. The trains consist of two head cars, an intermediate powered car and an intermediate trailer and are able to run at a speed of 90 km/h. This latest contract is funded by the VEB.RF and RoseksimBank.