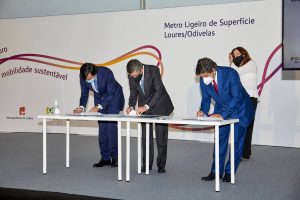 The ceremony was attended by the Portuguese Prime Minister, António Costa, the Minister of Environment and Climate Action, João Pedro Matos Fernandes and the Secretary of State for Mobility, Eduardo Pinheiro. The protocol was signed for the development of a new Collective Transport on Own Place (TCSP), using the Light Surface Subway (MLS) transport mode.

The EUR 250 million investment is provided through the Portuguese Recovery and Resilience Plan and is part of the Lisbon Metro expansion and modernisation programme.

The tender for design and construction as well as for the acquisition of the rolling stock is expected to be launched by the end of 2022. The project would be completed in the last quarter of 2025.

The new LRT will provide transport link to the Odivelas station, the northern terminus on the Yellow Line of the Lisbon Metro.

Following the agreement, the three authorities will start the study, planning and implementation of the project to expand the Yellow Line to the two municipalities. 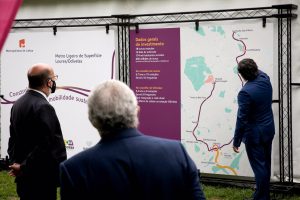 Under the cooperation, Metropolitano de Lisboa will be responsible for carrying out the preliminary studies and assessing the feasibility and design of the new project, including its connections with the existing public transport system and towards the urban areas involved.

The Loures/Odivelas LRT will have a total length of 12.1 km and 18 stations. In the Municipality of Loures, the line will be 6.7 km-long with 10 stations and will cross the areas of Loures, Santo António dos Cavaleiros and Frielas. In the municipality of Odivelas, the 5.4 km line with 8 stations will serve the areas of Póvoa de Santo Adrião, Olival Basto, Odivelas, Ramada and Caneças.

The metropolitan light rail line will serve a population of 174,000 inhabitants and will be an important step towards improving mobility in the Lisbon Metropolitan Area.

With this project, Metropolitano de Lisboa will improve the urban transport and will contribute to the transition towards sustainable mobility. The new line will also have a positive impact on the regeneration of urban areas, consolidating the existing poles of the urban system and increasing the offer of public transport to ensure greater territorial cohesion.