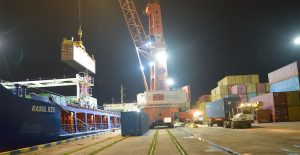 ADY Container, a subsidiary of Azerbaijan Railways, has launched a new transport service on the Batumi-Europe route, connecting China and Europe via the Middle Corridor.

A feeder vessel between the Georgian Port of Batumi and the Romanian port of Constanta has been launched as a joint project between ADY Container and ASCO, the Azerbaijan Caspian Shipping Company. The vessel, which will deliver containers from Port of Batumi to the Port of Constanta and in reverse direction will have 6 departures a month.

The representatives of ADY Container, a member of the Trans-Caspian International Transport Consortium, presented their plans to develop the multimodal connection and Azerbaijan’s transit opportunities of the Middle Corridor which is expected to boost connections and freight traffic not only along the route, but also in the region. The participants also discussed the routes connecting Central Asia with the European Union, the current state and the prospects of multimodal transport. The development of green logistics along the corridor was also the focus of discussions.

The new railway – sea connection between China and Europe, using Batumi-Europe route will ensure the integrity of the supply chain in the current complex situation and will allow China and Europe to connect quickly and efficiently through Kazakhstan, Azerbaijan, Georgia and Romania.

Recently, Grampet Group, the largest private railway group and logistics operator in Romania and Central and South-Eastern Europe, dispatched the first container train on the Middle Corridor from China, transiting Romania to Hungary.