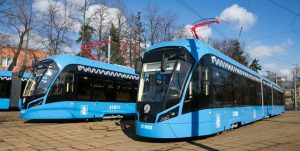 By the end of this year, 15 additional Vityaz-Moskva trams will be put into passenger operation in Moscow and by 2023, the city’s tramway network will be operated by new and modern vehicles.

Since the beginning of 2020, over 40 million trips were made with the Vityaz-Moskva new-generation trams. 375 Vityaz-Moskva trams are running on 25 routes in the northeast, east, southeast, southwest, south and centre of Moscow.

“Such eco-friendly above-ground public transport is absolutely the way of the future. That’s why Moscow is investing in e-buses and state-of-the-art trams,” said Maxim Liksutov, the deputy Moscow Mayor and head of the Department of Transport and  Road Infrastructure Development.

The Bauman and Oktyabrskoye depots have only got new carriages to date, and they are also being delivered to the Rusakov Depot.

The first Vityaz-Moskva with air conditioning, satellite navigation, CCTV, free Wi-Fi and USB chargers entered operation in 2017. The inside layout changed several times for passengers’ comfort with increased number of seats from 60 to 64, a second platform was established for bicycles and prams, and the driver’s cabin and control panel were upgraded.

The trams are noiseless and run smoothly, which makes a comfortable travel. The modern carriages have a total capacity of up to 260 passengers, which is higher than any other surface means of public transport in Moscow. Passengers use such trams about 215,000 times each day.

Currently, the new low-floor trams cover 15 districts of Moscow, while more than a half of the tram fleet comprises modern low-floor vehicles.

For an enhanced and available tram fleet, TMH and the Moscow Municipality have signed an agreement for tram production.

By the end of this year, Moscow plans to modernise and upgrade 25 km of tram tracks. In 2019, the city has modernised 32 km of lines. By 2024, the authorities plan to reconstruct and modernise all its tramway network which, together with the new vehicles, will provide efficient, fast and comfortable travel for passengers.