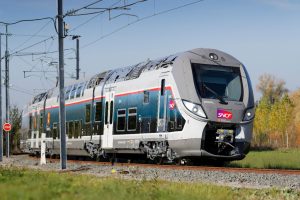 SNCF, on behalf of the Normandy Region, awarded Bombardier an additional EUR 162 million order for the supply of 11 Omneo Premium EMUs. The first trains are expected to be delivered at the end of 2023 when the region will have a fleet of 67 Omneo Premium trains

The delivery of the 11 ten-car double-deck EMUs is part of the framework agreement signed with SNCF in 2010 to deliver up to 860 trains for France’s Regions.

In May, Bombardier received a separate order for the supply of 16 additional ten-car trains with a value of EUR 245 million. In total, Bombardier will supply 27 additional Omneo Premium EMUs to SNCF for the Normandy Region.

The double-deck EMUs will operate on the railway routes linking Paris to Vernon-Rouen and Paris to Evreux-Serquigny. They will enter maintenance services mainly at the new Sotteville-lès-Rouen SNCF technicentre, as well as in Caen and Le Havre

The Region’s strategy, based on a fleet from the same train family, will enable an increase in operational flexibility and optimise maintenance costs.  The Normandy Region is the first one to order Omneo trains and Bombardier has developed a unique interior and exterior design to match the Region’s visual identity.

The trains will offer passengers increased comfort, more seats and highly comfortable interior fittings. Both in first and second class, each passenger can enjoy two individual armrests, reclining seats, a reading light, USB and power plugs as well as a large table. The trains are equipped with large LED screens and TFT flat screens in the seating areas. A dynamic seat reservation system provides valuable information to passengers and the train’s floor plan has been slightly adjusted to reach 550 seats for each 135 m trainset in addition to offering space for 12 bicycles.

Starting January 2020, Bombardier began the delivery the first Omneo trainsets from the initial order for 40 trains signed in November 2016. The trains have already entered commercial operation.

Designed and manufactured at Bombardier’s site in Crespin in the Hauts-de-France region, the trains are certified as ‘Made in France’.

The Omneo platform, which includes the Regio 2N and the Omneo Premium, is a family of extra-large double-deck trains which can be adapted in different versions to operate urban, regional and intercity services.