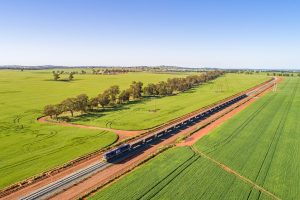 A AUD 5.5 billion (USD 4.2 billion) Inland Rail financing was provided by the Government of Australia to deliver the 1700 km – long rail fast freight corridor between Melbourne and Brisbane, via regional Victoria, NSW and Queensland.

The project covers rail improvements works and the construction of 600 km of new rail tracks along the alignment.
“Our ongoing investment in Inland Rail is backing jobs and businesses in regional Australia and will see the construction of a world-class freight network connecting Melbourne and Brisbane,” Minister for Finance Simon Birmingham said.

The improvements will deliver a stronger Inland Rail, with the design now including more than 4,500 additional culverts, nine additional viaducts, an additional 6.8 km of bridges, 10 extra grade separations, approximately 450 km of additional fencing, as well as removing 139 level crossings.

The enhancements will provide for greater local investment, mean Inland Rail will now support more than 21,500 jobs at the peak of construction and deliver an extra economic boost of AUD 2 billion (USD 1.53 billion).
The project will generate an economic boost of more than AUD 18 billion (USD 13.8 billion) to the economy during construction and over the first 50 years of operations.

The first section of Inland Rail, between Parkes and Narromine, is now completed. In that section alone, more than 1,800 people worked on the project, including more than 762 local residents and 302 Indigenous workers. Almost AUD 110 million (USD 84 million) was spent with local businesses, whilst 14,000 tonnes of Whyalla Steel worth AUD 20 million (USD 15.3 million) was used.

Work has now started on the 171-km Narrabri to North Star section, which will support thousands of jobs in north-western NSW and will use approximately 25,000 tonnes of Whyalla Steel and 341,000 Australian made concrete sleepers.

Planning is also well advanced on other sections of the track, with the Environmental Impact Statement (EIS) for the largest section between Narromine to Narrabri on public display and a further four statements expected to be released for the Queensland sections of Inland Rail in the coming months.

ARTC is also currently working with the New South Wales Government to respond to submissions made during the public exhibition of the North Star to Queensland Border EIS, which closed October 2020.
Inland Rail financing is provided by the Australian Government which will invest more than AUD 14.5 billion (USD 11 billion), while the remaining funds will come from a Public Private Partnership. ARTC, responsible for the implementation of the project, is expecting to complete the PPP procurement process and to award the contract in 2022. The financing comes partly from the private sector but requires payments from the public sector and/or users over the project’s lifetime.