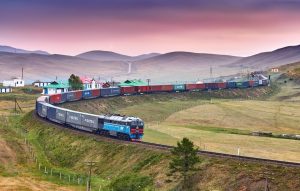 RZD Logistics intends to expand its Europe-China transit of sanctioned goods by testing a new transport service along the northern route through Zabaikalsk.

The company would add the new route on its rail transit portfolio from Europe through Russia to China.

On May 13 and 14, two 40-foot containers with powdered whey for the production of baby food left for the direction to China.

The first container was delivered to the train in Malaszewicze from Duisburg and will go to Changchun, and the second container was loaded onto a truck at the production site of the Danish company Thise Mejeri in Estonia and sent to Malaszewicze, from where it will go by rail to Harbin. Both trains with sanctioned cargo will cross the border through the border crossing in Zabaikalsk.

The forwarding of Europe-China transit of sanctioned goods service is performed by FELB, a subsidiary of RZD Logistics, while TransContainer is responsible for the transport services throughout Russia.

Hanging of the electronic seal will be carried out at the Smolensk-Sortirovochny railway station, removal, at the Zabaykalsk station.

This test follows an early transport service trial of sanctioned goods from Europe to China running across Russia, using electronic navigation seals, in Smolensk, and the removal at Kartaly station. The new service was implemented under the partnership between UTLC ERA and RZD Logistics, in cooperation with Federal Customs Service, Rostransnadzor, and foreign partners and structures of RZD, including the FELB subsidiary.

The Xian – Duisburg train was operated by DBO Bahnoperator GmbH. The refrigerated container transport route passes through Belarus and Kazakhstan along one of the UTLC ERA base routes.

Frozen salmon was transported from the Netherlands to Duisburg, and then sent to China between 21 and 27 March, crossing Russia. The goods were delivered to Xi’an and then to Shanghai.

The transit sanctioned goods through Russia is using the electronic navigation seals established by a Presidential Decree issued in June 2019.