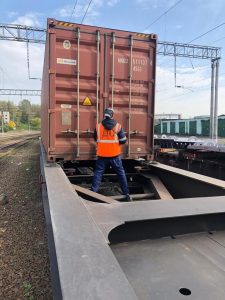 UTLC ERA has formed a train of 50 containers transporting dairy products included in the Russian sanctions list on the Europe-China via Russia route.
This is the largest batch of sanctioned products since the opening of transit of sanctioned goods through Russia in March 2020. In total, UTLC ERA has transported 101 containers with goods from the Russian sanctions list.

The train loaded with milk powder and cream entered the territory of Russia from Belarus through the Smolensk-Sortirovochny railway checkpoint.

Navigation seals were placed on the containers and activated by the sealing operator, the Digital Platform Development Center company, to ensure control along the route at the Rostransnadzor checkpoint. One hour was the total time required for hanging navigation seals. The information about the shipment was registered in the data systems of the CRPC. Then the train proceeded its transit through the territory of Russia to Kazakhstan. It took 3 days for train to cross the territory of the Russian Federation, travelling a total route of about 2500 km.

“The shortest route from Europe to China and Asian countries goes through the territory of Russia. The use of the Russian transport network reduces the carrier’s costs by 25-30% in comparison to bypass land routes. Digitalisation of transport with the use of electronic navigation seals makes it possible to speed up the clearance of goods transport and minimize the time and financial costs for organising the transport process. This makes it possible for carriers to improve the quality of services as well as frees up additional working capital for suppliers,” Elena Ignatenkova, the General Director of the Center for the Development of Digital Platforms, said.

“From the moment of the first dispatch, we see that rail transit of express container trains with goods from Russian sanctions list through the territory of Russia is in great demand on the part of European and Chinese companies. The implementation of any project could be characterized by staging: the planning stages have already been passed, as well as the stages of pilot shipments. The full-stack formation of a container train loaded with products included in the sanctions list is the beginning of the commercialization stage, which is the great chance for European manufacturers to regularly send their goods to consumers in China in a short time by rail,” Alexey Grom, CEO of UTLC ERA explained.

The railway freight operator is expecting a further increase of transport demand for goods from Russian sanctions list on the Europe-China via Russia route.

The transit of sanctioned cargo through the territory of Russia is allowed by the Decree of the President of the Russian Federation issued in June 2019. It states that that electronic navigation seals must be used in the process. Monitoring of such shipments is carried out using the Goods Transportation Tracking System, which collects, processes, stores and automatically transfers data on the location and safety of goods to control and supervisory authorities. The shipper can also see detailed information about the location of his cargo in his personal account.