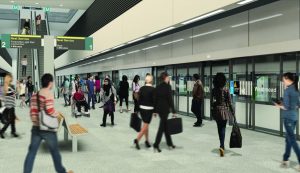 The Government of New South Wales announced the plans to build Pyrmont metro station as part of the Sydney Metro West project for which seven proposed metro stations have been confirmed.

The station will provide passengers with about a 26-minute saving between Parramatta and Pyrmont, with the trip taking just 18 minutes.

The Pyrmont metro station location is subject to further planning and design work. Sydney Metro has worked with the Department of Planning and other stakeholders to ensure the plans for a metro station at Pyrmont are consistent with the planning work being undertaken to unlock innovation and investment in the Pyrmont Peninsula.

The new station will ease the congestion at key CBD railway stations like Central and Town Hall and will relieve the demand on the Dulwich Hill Light Rail Line by about 10 per cent. Pyrmont metro station will serve major events and entertainment activities, including those around Darling Harbour and the Sydney International Convention Centre and will support Pyrmont as a diverse, desirable, vibrant and accessible inner urban precinct.

A value share contribution mechanism will be applied to the Pyrmont Peninsula once the Sydney Metro West project opens. It will require some commercial property owners, other than small businesses, that benefit from increased land values associated with the new station to make an annual contribution to offset the cost of building the station. A one-off Transport Special Infrastructure Contribution will also be applied to certain new developments in the Pyrmont Peninsula in advance of the station opening.

The new Pyrmont metro station, an inner-city suburb of Sydney, will deliver major benefits to the entire community and will create a development opportunity.

The station “will become the centre of the community and the western gateway to the Sydney CBD providing not only world-class transport options but opportunities to support new jobs and homes. Modelling also predicts this will be one of the busiest stations on the Sydney Metro West line and will provide customers with more choice,” Minister for Transport Andrew Constance said.  The station project will create 500 direct and 1700 indirect jobs.